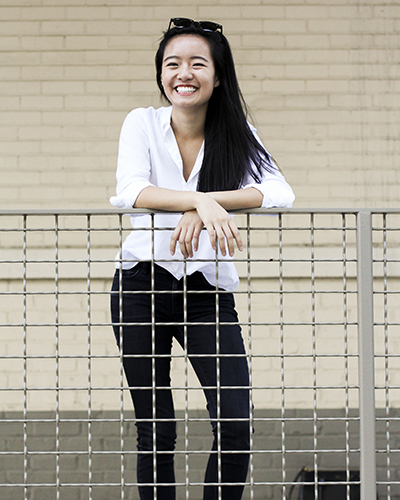 Georgia Institute of Technology junior Tammy VuPham plans to use her English, Spanish, Arabic, and Vietnamese skills to help solve conflicts on a global scale.

VuPham’s parents are Vietnamese refugees who came to the United States after the Vietnam War, and she said her upbringing influenced her career path.

“Growing up with the stories from my parents and grandparents and hearing how they lived through war, those things had a big impact on me when I decided to go to Georgia Tech.”

She further developed her interest in working internationally while a student at Atlanta International School, where she first became involved in the city’s refugee community. She helped to create mentorship programs and partner students through English as a second language programs. Particularly, she worked with the Global Village Project, a school for refugee women.

“A lot of these girls come from war-torn areas where certain things are not taught or are taboo to talk about. For me, to work with those girls every day and to help fundraise for their school was impactful for my drive going into Georgia Tech.”

She was drawn to the idea of using multiple skill sets to accomplish her goals and saw Georgia Tech as “the perfect blend of STEM and the humanities.”

After graduating high school in 2014, she took a gap year in Morocco where she studied French and Arabic through the U.S. Department of State’s National Security Language Initiative for Youth Scholarship. There, she volunteered with women’s education organizations. She said that the experience “gave me drive and inspiration that I wouldn’t have had otherwise.”

“Looking back on that journey, I will never forget it. I remember how tired and hungry I was, but it was great. We became a team after that week.”

She then met with Stamps Scholars at the United States Naval Academy for its Foreign Affairs Conference, the largest annual undergraduate security conference in the world. She was interested in the focus on women’s equality in relation to global security and its connection to her work.

After her freshman year, she conducted research on counterterrorism policy in the Middle East and North Africa with Dr. Jenna Jordan, an internationally recognized counterterror analyst.

“When you get your hands on a topic like that, you realize how multifaceted it is and how difficult it is to try to find a solution.

Afterwards, she went on to lead the planning for the “America’s Role in the Post-9/11 World” thread at the 2017 Stamps Scholars National Convention. She also summited Half Dome in Yosemite National Park with senior Georgia Tech Stamps Scholars.

“Hiking with older scholars gave me a precious opportunity to ask questions about their college experience, and in turn, I received advice on how to best use my opportunities during my time in college.”

In addition, she has enjoyed taking classes in industrial design to expand her skillset.

“It’s not only helping people, but learning skills like design, for example, so I can teach other people to do that as well.”

She will continue to help facilitate the language exchange program and work closely with the international student population. Currently, she is a campus representative with She’s the First, a national organization that provides a multifaceted approach to women’s healthcare and education. She helps provide educational programs through setting up fundraisers for refugee women in Atlanta.

“To educate women, to give women the power and the confidence that they deserve, it helps them and creates ripples in society.”

Looking to the future

Her goal for the rest of college is to continue growing her language skills. She will spend her senior year abroad at the National University of Singapore and will then intern at the Massachusetts Institute of Technology’s International Design Centre. She is looking forward to attending graduate school abroad.

“Ultimately, college is a time to ask people questions, be curious about what other people are doing, and learn new things.”

Her career goal is to work for a nongovernmental organization focused in international work, possibly with women’s issues in Asia.

“My Stamps Scholarship has not only affected how I view my time in college, but also how I want to go about making positive change in the world. It’s given me the resolve to learn in my own way, so that I can teach others in return.”