Creating Art Through an Historical Lens 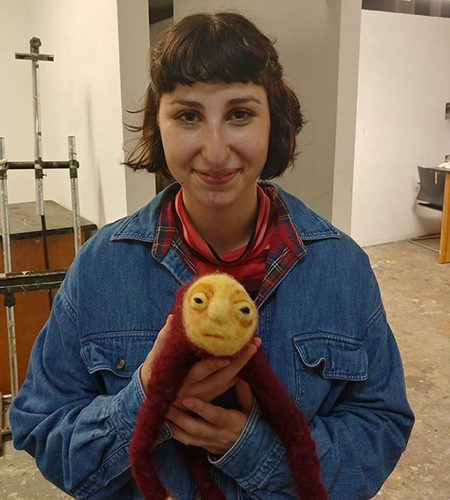 Oberlin Stamps Scholar Nina Josephson was inspired by her family of artists to pursue a creative career in visual media.

A third generation artist, Josephson went to LaGuardia High School of Music & Arts in New York City where she was involved with language and learning about Latin America and East Asian cultures. She studied Hindi and traveled to India through the U.S. State Department.

She was drawn to Oberlin because her older sister was an alumna. She wanted to go to a small liberal arts school where she could be engaged in social activism. While she initially planned on just studying history with a focus on socialist movements, she was drawn back into art.

“When you’re learning about history, you’re seeing how the visual influences major movements and change,” she said. “In early history, when there was not a lot of literacy, art is how people got their ideas across and was the only way you could really spread information.”

She studied Spanish and traveled to Guatemala her freshman year to learn about the genocide of indigenous people during the 20th century.

“I was interested in the communist systems in South America and the American response to that,” she said. “This program through Oberlin Students in Solidary with Guatemala seemed like the next step.”

On campus, she is involved with the print collective Yeo Press because “printmaking was the first medium that made me take myself seriously as an artist.”

With the collective’s focus on community activism, Josephson has worked on projects for the 2017 March for Science and helping others learn printmaking.

She is also a member of the college’s co-operative houses, an opportunity to live with other students and work together to build community.

As she became more involved in creating art, she developed a fascination with the line between life and death and began pickling and preserving dead animals such as mice, fetal pigs, and even a squid in jars and presenting them in installations.

“I really like the way the preserved animals suspend creatures in a state that feels almost in between life and death,” she said. “These creatures force viewers to confront their own mortality and the strangeness of life and death. They spark such beautiful visceral emotions in the viewer, whether disgust or enchantment.”

This past summer, she dove into textiles interning with shoemaker and artist Emily Spray. Josephson learned to work with leather and combine functionality and art.

She said, “I learned so many new techniques and have begun to see how I can intersect art with daily life in a creative way.”

Currently, she is in her senior studio class, spending the full year working on a major instillation that calls into question human nature. By using felted objects and papier-m?¢ch?©, she is attempting to create new life in order to spark self-reflection in others and herself.

“I make a lot of surreal, carnival-like creatures and work a lot with bright colors and absurd patterns and forms,” she said. “It’s an attempt to reflect the inner self and to think about the beast within us.”

“Felt is largely overlooked in professional contemporary art, but it’s so dynamic and so beautiful,” she said. “It has so much life, it’s like a growing creature.”

She highlighted the benefit of studying art in an academic environment and the encouragement to take herself more seriously as an artist and to express something about the way she sees the world.

She said, “It’s easy to just make something that looks good, but being in a class and working closely with professors and other students, it pushes yourself to think deeper about things you’re making and look beyond aesthetics.”

For her work, she was recently nominated for an Excellence in Visual Arts Award through the Association of Independent Colleges and Universities of Ohio.

In the future, she would like to teach middle or high school. Her life goal is to be able to create art every day, whether that’s for her job or hobby.

She said, “When you’re having a bad day and you’re frustrated with life, just being able to make something beautiful and exciting that you can connect with other people about is just so rewarding.”