Stamps Scholars and Storytelling: Meet the Scholars Who Are Also Published Authors

Whether it be fiction connected to personal identity or science-based children’s books, many Stamps Scholars and alumni have left their mark through the written word. Learn about how four of these authors have turned their personal and academic experiences into profound and compelling stories. 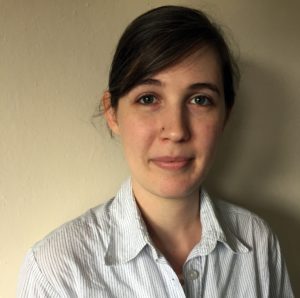 Jessie Roy
University of Michigan alumna Jessie Roy (‘10) is working on her novel BRIDES, which explores the aftermath of gay marriage through its seismic transformation of one family. The book’s three-part structure parallels its emotional arc, as bridal designer Helena struggles to come to terms with her exile from the family who disowned her after her wedding. The unfinished manuscript won second place in the 2020 James Jones First Novel Fellowship contest. The book draws from Roy’s experience working in the bridal industry and her own family histories that she’s reimagined and embellished, aided by primary source research from women’s magazines, diaries, and teacher training manuals. Her own identity also deeply informs BRIDES.

“I would say that on a personal level, as a queer person, the choice to get married was very important to me,” said Roy. “I’ve always been fascinated by the differences between my experience of my wedding, the way a wedding is ‘supposed to’ feel, and the actual experiences of brides who are not queer as well.”

As an undergrad, Roy studied creative writing and ancient civilizations (focusing on the languages of ancient Egypt and Mesopotamia). While at the University of Michigan, she won several Hopwood Awards for her writing. After graduation, she went on to complete an MFA in creative writing at Syracuse University. She is currently in her final year of a Ph.D. program at the University of Wisconsin-Milwaukee, where she teaches academic and creative writing to undergraduates. Her short fiction has appeared in American Literary Review and The Journal. She lives in New York with her spouse, a professor of media studies at New York University. 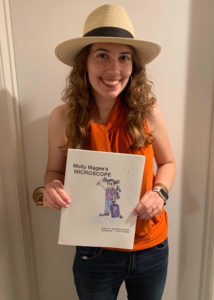 Makenna Lorraine Pennel
University of Oregon alumna Makenna Lorraine Pennel (‘20) has always loved chemistry, so she decided to create a children’s book character who encourages young people to become interested in scientific research. Pennel has written two books so far, both centered around a character named Molly Magee who enjoys science and travels with her best friend, a talking microscope, making new discoveries.

“I wrote the first book after traveling abroad for the first time,” said Pennel. “It served as a way for me to reflect on how wonderful, exciting, and thought-provoking those experiences were.”

She vividly remembers writing the first stanzas on a train ride through the Scottish Highlands while participating in a Fulbright Summer Institute. She’s always appreciated rhymes, so the books are both written in “Seussian” prose. She said each stanza is a fun puzzle, and she has found that the rhyming constraint forces her to process her ideas differently than she normally would.

Pennel’s mom illustrated the first book as a surprise Christmas present a few years ago. She hopes the books engaging to children and parents alike. Her second book is about citizen science and emphasizes how everyone is a scientist, regardless of age or background. In the story, Molly becomes a citizen scientist in her community by documenting microplastics she finds in the environment. This is a subject near and dear to Pennel’s heart, as she is currently a chemistry Ph.D. student at Stanford University studying catalytic plastic deconstruction and ways we can reduce plastic pollution. 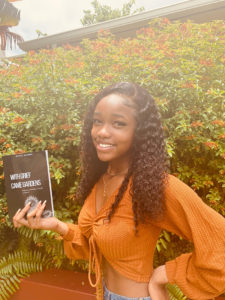 Joyce Azonye
Barry University Scholar Joyce Azonye (‘24) was inspired by a middle school teacher to pursue writing creatively. She said, “A teacher pointed out how fascinated he was with my ability to craft a story which kept him, as the reader, anticipating what would come next. He said that my writing was extremely impressive for someone my age.”

At that particular moment, she didn’t think too much of what he was saying because she had not taken her abilities too seriously, but now as she looks back, she realizes how transitional that moment was. Azonye now studies English with a specialization in professional writing. A significant portion of her writing is about her late father. Her book, With Grief Came Gardens, is a tribute to him and the impact he has had on her life as well as what losing a parent has meant for her and her story. The text combines poetry and short stories that she wrote over the course of two years as a way to express the  feelings she had kept buried deep inside. After publishing the book earlier this year, she received an outpouring of support, for not only the publication, but also for the ability to put out a piece of work that resonated with so many others.

Azonye said, “Many people have reached out and informed me that my work had touched them dearly and my book acted as a mirror in the sense that it not only showed my readers the real me, but it also gave them the ability to see themselves and understand that their thoughts and experiences are shared.”

After obtaining her bachelor’s degree, she plans to travel abroad and teach English in Europe while continuing to write books. Along her journey, she also hopes to continue schooling and obtain a Ph.D. in her field. 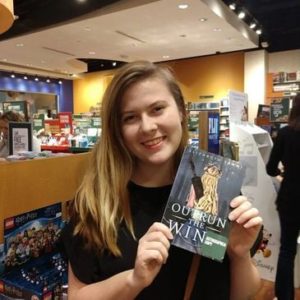 Elizabeth Tammi
For Mercer University alumna Elizabeth Tammi (‘20), books were one of the earliest pillars of her life. As soon as she realized actual people wrote said books, she knew that was the path for her. In fourth grade, she made it a specific goal to have a book published before she turned 18. Although the manuscript for her first book was rejected by publishers, she gained a deeper understanding of the publishing industry during the process and threw herself into workshops and conferences.

Her undergraduate studies in creative writing and journalism pushed her to complete a second manuscript that landed a publishing deal. Outrun the Wind is a young adult fantasy that reimagines the story of Atalanta from Greek mythology. It came out in 2018 and earned complimentary reviews from the School Library Journal and Midwest Book Review.

With the same publishing team, she sold her following book on proposal. For the first time, she started writing a book knowing that it would be published, which she said was immensely reassuring and terrifying and culminated in the publication of The Weight of a Soul in 2019. This novel builds on Norse mythology and follows a Viking girl’s descent into darkness as she strikes a dangerous deal to bring back her sister from the dead. The Weight of a Soul received a Moonbeam Children’s Book Award in the supernatural category.

Since then, Tammi signed with KT Literary Agency and is navigating her next steps in the writing world. By day, she also engages in writing and multimedia projects as the social media lead for the Hubble Space Telescope mission at NASA. She recently moved to the Washington DC area and is excited to be involved with the local literary scene.