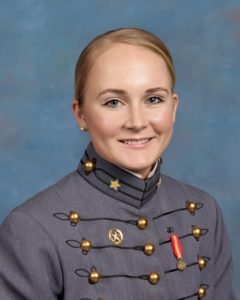 The Rhodes Scholarship is an international, postgraduate award for students across academic and professional interests to study at the University of Oxford. It is considered one of the world’s most prestigious scholarships.

Cadet Veronica Lucian, a fourth year Scholar at the U.S. Military Academy (West Point), was raised in Delaware and New Jersey as the oldest of five children. The daughter of a lawyer and homemaker, she quickly learned the importance of hard work and dedication, as well as the value of leadership and compassion. A life science major with a minor in nuclear science, Lucian has done extensive materials research during her undergraduate career. Her scientific work appears in Matter, a monthly scientific journal focused on the general field of materials science. Lucian is also a soloist for the West Point Glee Club and has sung for distinguished guests and public officials, including the vice president of the United States.

She is the founder of a Women’s Mentorship Group at West Point, which provides an informal avenue for women to collaborate with senior army leaders and to understand career opportunities in the United States Army. Lucian is also a recipient of the Goldwater Scholarship. As a Rhodes Scholar, she will read for a Master of Science in materials at Oxford. After Oxford, she hopes to commission into the Army Medical Corps and serve in the United States Army as a joint researcher and trauma surgeon, bringing hope and healing to vulnerable populations throughout the world.

“The Stamps Scholarship endorsed my research in its early stages, encouraging me to tackle the large issues in medicine I wanted to solve and providing me the means to do so,” said Lucian. “This incredibly supportive group of Scholars have inspired me and pushed me to continue seeking to find answers that don’t yet exist.”