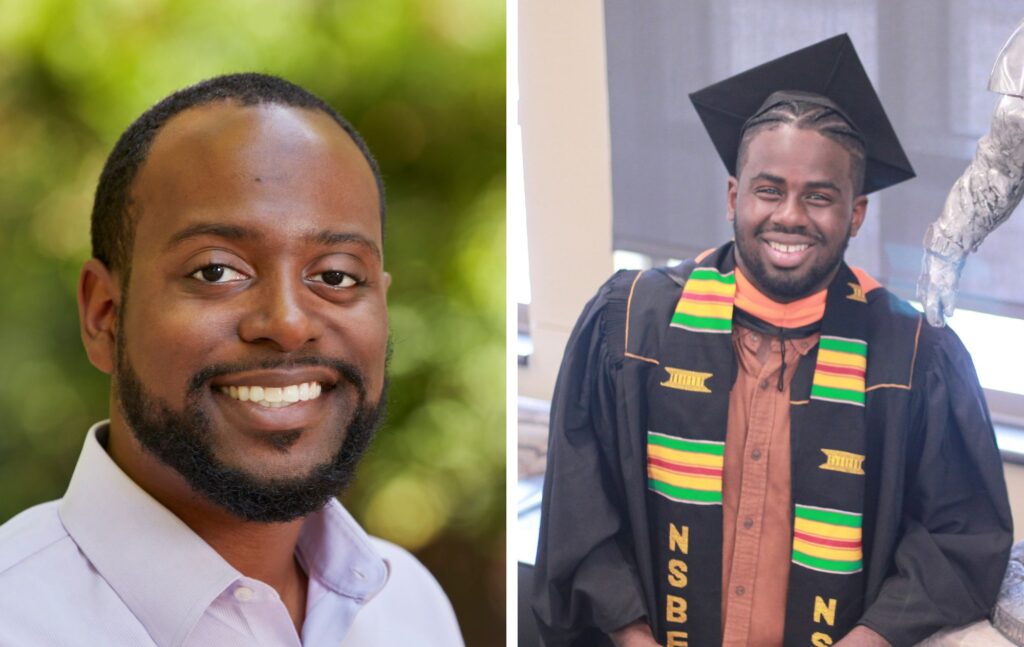 Stamps alumni Dr. Jeremy Feaster (Georgia Tech, ‘11) and Brandon Wells (Purdue University, ‘20) come from different areas of science, with Dr. Feaster majoring in chemical engineering as an undergraduate student and Wells in materials engineering. However, their careers recently converged in Livermore, CA at the Lawrence Livermore National Laboratory, a federal facility at the forefront of scientific research.

At Lawrence Livermore, scientists focus on capturing carbon dioxide (CO2) with the purpose of reducing emissions. The question is: what should be done with the greenhouse gas, once captured? One approach is to convert the gas into fuels and chemicals. Dr. Feaster, who has worked at the lab for almost 5 years, uses 3D printing and electrochemical engineering to develop catalysts, reactors, and systems to convert waste carbon into valuable products such as ethanol, ethylene, and syngas. Wells, who worked at Lawrence Livermore last year and will be returning this year as an encapsulation engineer, worked on models demonstrating what can go wrong when scaling up this process, which is crucial in guiding manufacturing and 3D printing to build the most efficient reactors. Dr. Feaster said, “We want to be able to build them with an understanding of fluid dynamics and mass transport phenomena. How do we get CO2 to the right place in the reactor so that it can be reacted and get converted? And then, how do we get the products out?”

Dr. Feaster and Wells were able to work collaboratively to answer these questions when Wells was transferred to Feaster’s project in the summer of 2021. During this rotation, Dr. Feaster provided Wells with essential data to set up the fluids modeling software, used to visualize and predict what was going on inside the electrochemical reactor that Dr. Feaster was developing. Wells was then able to provide data on parts of the device that were difficult to measure directly while the system was running. He later transferred this new skill, learned while collaborating with Dr. Feaster, to his own research with encapsulation for his master’s degree.

On collaborating with a fellow Stamps Scholar, Dr. Feaster said, “One of the things that is such a benefit of the Stamps Scholarship is you get this opportunity to be creative with other incredible people. Especially when you’re coming from spaces where you’re not necessarily doing the same thing, it generates such a powerful sense of momentum when it comes to creativity and your ability to solve big problems.” 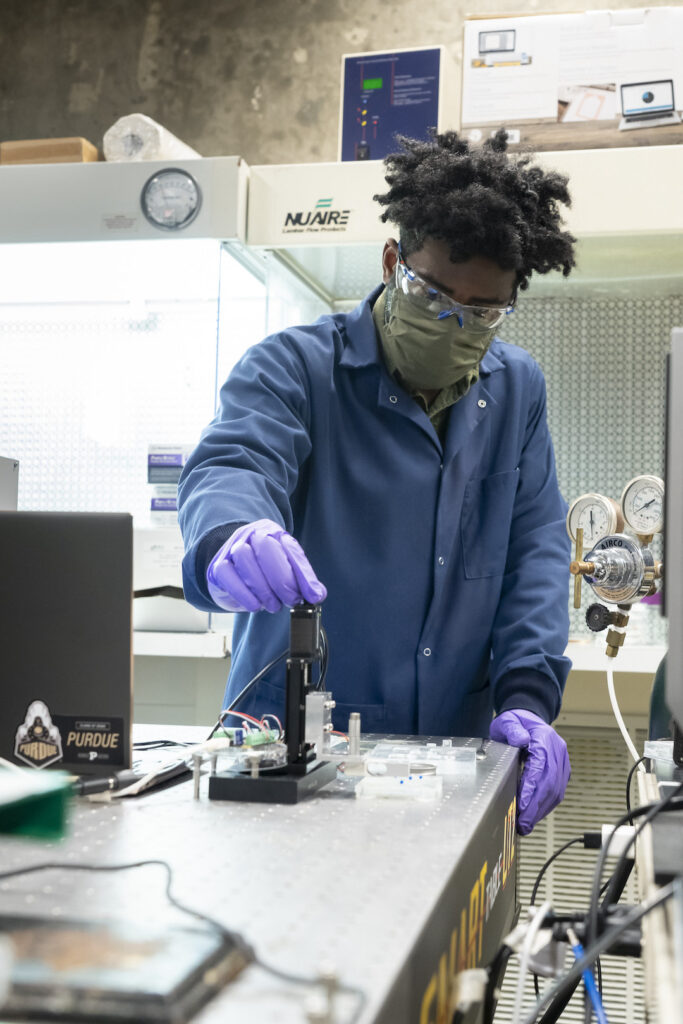 Wells became passionate about materials engineering because “it deals with a lot of things that we see on a day-to-day basis and with connecting what we see, what we experience, to what’s happening on the inside of that material.” He credits the Stamps Scholarship with helping him discover this interest, particularly by affording him opportunities to attend materials engineering conferences and present his own research. He recently finished a master’s degree at Purdue, where he focused on developing a fluids model of a manufacturing process called “encapsulation”, which forms a protective shell around functional liquids to make them easier to transport and more durable in the field. Encapsulation has applications in pharmacy, thermal management, and agriculture, which particularly interests Wells.

He was drawn to Lawrence Livermore because “they have a really collaborative mindset, both between different departments within the lab, and with groups in industry and academia. Whether it’s proving a new concept or building off of a more established one, there are a lot of interesting projects and team members to learn from.” 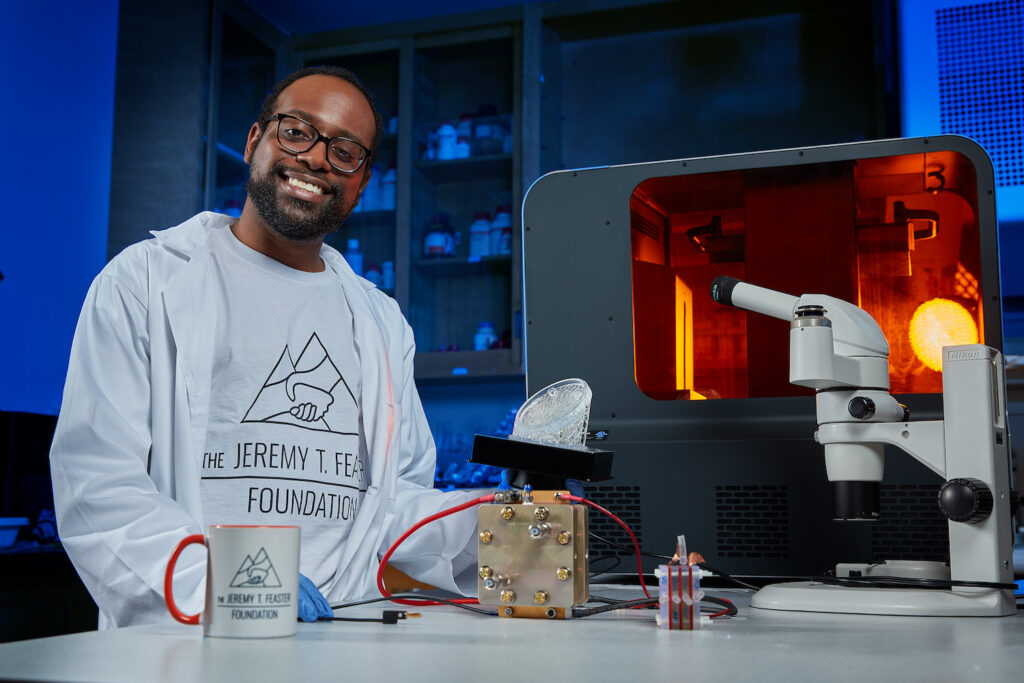 Dr. Feaster has been working on carbon dioxide conversion for over 10 years and focused his doctoral dissertation on the subject while studying at Stanford University. He joined Lawrence Livermore as a postdoctoral scholar, where he learned how to combine advanced manufacturing and 3D printing with his chemical engineering background to create new generations of chemical reactors for energy and climate applications. His newest project focuses on turning air into fertilizer with no negative byproducts. His research team is working on a chemical reaction pathway that has never been demonstrated before; they have promising preliminary results that show that the chemistry is viable, with a groundbreaking paper forthcoming.

Dr. Feaster said, “One of the nice things about Lawrence Livermore is that there are just so many experts in so many different spaces. It’s really rare to have access to all of these experts and be able to say, ‘We should talk and we should work on something together.’”

Dr. Feaster also runs the Jeremy T. Feaster Foundation, a 501(c)(3) nonprofit that supports Black and underrepresented minority students “lifting as they climb” along their paths to success. To date, the Feaster Foundation has awarded over $20,000 in scholarships to students around the nation who are passionate about serving their community and their peers.